Planet of the Humans

Planet of the Humans dares to say what no one will—that we are losing the battle to stop climate change because we are following environmental leaders who have taken us down the wrong road. More at: PlanetoftheHumans.com

I sadly just learned of the passing of safe streets pioneer, Deb Hubsmith, who was responsible for saving countless lives and reminds us of the various forms that environmental leadership can take. I did not know Deb personally but had corresponded with her when writing Green Illusions. I covered her important work in articles and in Green Illusions, excerpted below. I wish her family and colleagues the best during this time.

…Many of the nation’s schools stand behind a barricade of rushed drivers–hardly a safe environment for students to bike or walk to class. A student environmental group at Bridgewater-Raritan High School raised money for a bike rack only to have their principal reject it, citing safety risks. Similarly, a principal at Island Park Elementary School in Mercer Island, Washington, an avid bicycler herself, vetoed a proposed bike route, pointing out that a fifth-grader had recently been killed while walking his bike through a street crossing.

Stories such as these are all too familiar to Deb Hubsmith, director of the Safe Routes to School (SRTS) National Partnership, which institutes programs across the country to make walking and biking to school safer and more practical for students and educators. Testifying to Congress about an SRTS pilot program, Hubsmith stated, “In only two years, we documented a 64 percent increase in the number of children walking, a 114 percent increase in the number of students biking, a 91 percent increase in the number of students carpooling, and a 39 percent decrease in the number of children arriving by private car carrying only one student.” Nevertheless, even though children represent over 12 percent of pedestrian fatalities, and bicycle-related injuries send over a quarter million children to hospitals annually, the SRTS won just 0.2 percent of the U.S. Department of Transportation’s safety budget. And even though safe routes are a far more effective challenge to fossil-fuel consumption than solar cells, legislators overwhelmingly direct more money into the solar pot. In California, for every dollar spent on safe routes, well over ten dollars has flowed to solar cells during every budget year from 2007 thru today.

Given the clear and far-ranging benefits of walking and biking to school, the fact that communities hold bake sales to finance bike racks and safe thruways for students while the fetishized solar-cell industry bathes itself in billions of public funds is an inglorious national embarrassment. There is no secret to designing safe and convenient bikeable and walkable communities. The strategies are flexible to a wide array of neighborhood layouts, simple to institute, and return rapid paybacks in terms of public safety, quality of life, energy footprints, and long-term infrastructure maintenance costs. Ultimately, the success of bikeable neighborhoods hinges on a community’s ability to establish a bicycling culture, where bicycling and walking stand as legitimate and esteemed modes of transportation…

No, I won’t be cooking, so it safe to come join me for lunch, a short talk, and a discussion/Q&A. It’s happening this Friday, Feb 13th, at the Illinois Institute of Technology at 12:30pm.

See more about the book:

Ozzie at the City Club

No, I’m afraid that’s not a statue of me. But if you are interested in a Green Illusions show-and-tell or would like to hear about the new project I’ve been working on, I will be giving a talk and taking questions at the City Club in San Francisco on June 18th at noon, lunch included. Tickets are $45 (If the cost causes any difficulties, let me know). Here’s the link.

See more about the book:

I’m delighted to announce that Green Illusions has won the Northern California Book Award. I’ll be saying a few words and taking questions along with two amazing writers, Victoria Sweet and Art Beck at the Mechanics’ Institute, an impressive San Francisco literary landmark. Mention that you are my guest to receive a complimentary ticket at the box office or call (415) 393-0100.

Tesla, Leaf: Unclean at Any Speed? 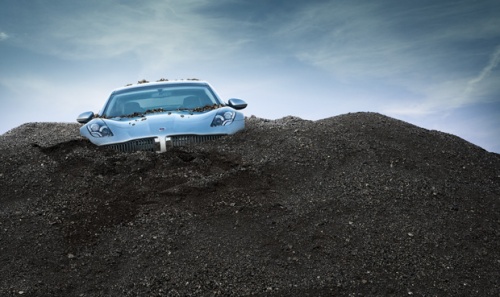 I was once an electric car enthusiast. I even built one! But in my new IEEE cover feature, I ask, “Are electric cars among the cleanest transportation options, or among the dirtiest?”

Unclean at Any Speed considers the entire life cycle of electric cars, especially their manufacturing impacts, in an effort to reveal a more comprehensive understanding of these vehicles, which governments are spending billions to subsidize. But there’s a more intriguing question.

Why did we ever think electric cars would be clean in the first place? And, how did electric cars come to be revered as a symbol of progressive green identity?

I start the article with a story from last summer, when California highway police pulled over pop star Justin Bieber, speeding through LA as he attempted to shake off the paparazzi. His car? A chrome-plated $100,000 plug-in hybrid Fisker Karma. Bieber’s manager, Scooter Braun, and fellow singer Usher offered it as an 18th-birthday gift – televised – where Braun remarked, “We wanted to make sure, since you love cars, that when you are on the road you are always looking environmentally friendly, and we decided to get you a car that would make you stand out a little bit.” Mission accomplished.

Bieber joins a growing list of eco-celebrities who are leveraging their electric cars into green credentials. President Obama once dared to envision a million electric cars in the U.S. by 2015. London’s mayor, Boris Johnson, vibrated to the press over his born-again electric conversion after driving a Tesla Roadster, marveling how the American sports coupé produced “no more noxious vapors than a dandelion in an alpine meadow.”

Environmentalists who once stood entirely against the proliferation of automobiles now champion subsidies for companies selling electric cars and tax credits for people buying them.

Alas, these carrots can’t overcome the reality that the prices of electric cars are still very high—a reflection of the substantial material and fossil-fuel costs that accrue to the companies constructing them. And some taxpayers understandably feel cheated that these subsidies tend to go to the very rich. Amidst all the hype and hyperbole, it’s time to look behind the curtain. Are electric cars really so green?

My article considers how electric cars merely shift negative impacts from one place to another. Most electric-car assessments analyze only the charging of the car. This is an important factor indeed. But a more rigorous analysis would consider the environmental impacts over the vehicle’s entire life cycle, from its construction through its operation and on to its eventual retirement at the junkyard.

The electric car’s presumed cleanliness has not held up to scrutiny from broad, publicly funded studies from the National Academy of Sciences, the National Science Foundation and the Congressional Budget Office. For instance, The National Academies’ assessment drew together the effects of vehicle construction, fuel extraction, refining, emissions, and other factors.

In a stomach punch to electric-car advocates, it concluded that the vehicles’ lifetime health and environmental damages are actually greater than those of gasoline-powered cars. Indeed, the study found that an electric car is likely worse than a car fueled exclusively by gasoline derived from Canadian tar-sands! 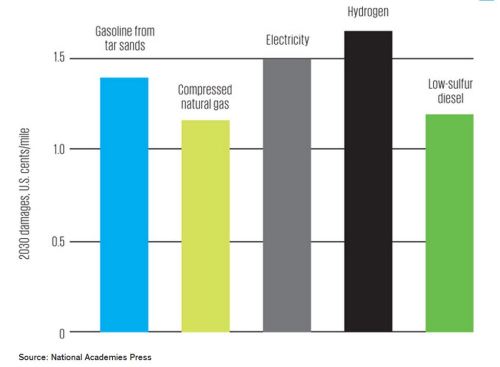 The hope, of course, is that electric-car technology and power grids will improve and become cleaner over time. But don’t expect batteries, solar cells, and other clean-energy technologies to ride a Moore’s Law–like curve of exponential development. Rather, they’ll experience asymptotic growth toward some ultimate efficiency ceiling. When the NationalAcademy’s researchers projected technology advancements and improvement to the U.S. electrical grid out to 2030, they still found no benefit to driving an electric vehicle.

If those estimates are correct, the sorcery surrounding electric cars stands to worsen public health and the environment rather than the intended opposite. But even if the researchers are wrong, there is a more fundamental illusion at work on the electric-car stage.

Almost every electric vehicle study compares electric vehicles to gas-powered ones. In doing so, their findings draw attention away from the broad array of transportation options available—including living walking, bicycling, and using mass transit.

No doubt, gasoline- and diesel-fueled cars are expensive and dirty. Road accidents kill tens of thousands of people annually in the United States alone and injure countless more. Using them as a standard against which to judge another technology is a remarkably low bar. Even if electric cars someday pass over that bar, how will they stack up against other alternatives?

Or, check out the book:

I just received a letter of congratulations this morning.  Apparently that critique of green energy that I wrote is one of five nominees for the 32nd Annual Northern California Book Awards. Although, the other four authors are perhaps insurmountable competition. My money is actually on Seth Rosenfeld for Subversives: The FBI’s War on Student Radicals, and Reagan’s Rise to Power.

Of the disadvantages of renewable energy, one issue stands out: Can these technologies be renewed without fossil fuels? I recently spoke with Mark Hand about the renewability of renewable energy in an interview. Here’s the first question:

SNL Energy: What is your reaction when you see news headlines that say, “100% renewables could be closer than we think,” or, “European Union could reach 100% renewables by 2050?”

Ozzie Zehner: There are lots of research studies saying we have enough wind energy to supply 100x our needs or we have enough solar in the Mojave Desert to do this and that. The problem is that if we were to actually build that many solar panels, for instance, it would be an ecological disaster. The Mojave Desert might be the Saudi Arabia of solar, but if we were to cover deserts with solar cells, the consequences would destroy civilization as we know it within a single generation just because of heavy metals, greenhouse gases, economic effects and so on.

In my mind, there is a presumption that we have a choice between alternative energy and fossil fuels. But the reason that I wrote the book was to draw out why that choice that we seem to have between the two is an illusion. And that’s because alternative energy technologies rely on fossil fuels through every stage of their life. They rely on fossil fuels for raw material extraction, for fabrication, for insulation and maintenance, and for decommissioning and disposal.

Aside from the physical lifespan, they also rely on fossil fuels for their financing. They rely on an economy whose growth is driven by fossil fuels. The kind of financing that you need for renewables requires that. You need concurrent fossil fuel plants running alongside solar cells and wind turbines at all times.
From ‘Green Illusions’ author dissects ‘overly optimistic expectations’ for wind, solar in SNL Energy, April 1, 2013.

President Obama’s Energy Security Trust, announced this morning, expands offshore oil drilling operations in order to provide a tax base for alternative energy, which will in turn lead to economic growth.

The irony in the president’s proposal is that it exposes how alternative technologies rely on economic arrangements that are themselves reliant on fossil fuels. And, if they work as advertised, these energy technologies will spur the kind of growth that will increase pressure to extract and burn fossil fuels well into the future.

What You Don’t Know about Inequality

Inequality in American society is apparently not well understood by the general public. This motion infographic renders:

1) What people think a fair income distribution looks like

Wealth ultimately arises from natural resource extraction, primarily fossil fuels. So, this film offers a launching point to think about how the earth’s resources should be shared among its inhabitants. Also, how does income inequality affect rates and forms of consumption, investment, growth and other stresses on the non-human world?

See more about energy inequality in this environmental book: